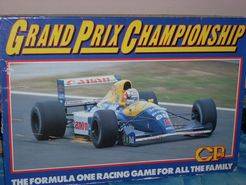 ...all the drama of F1 racing, pit stops, punctures, engine blow-ups restarts etc… (From the back of the box) Each player gets 2 cars, and they're pretty good: 5.5x3 cm, wheels that turn, not all cloned from one mold. It's a move-by-dice game with the die modified by cards you must pick up whenever you overtake an opponent on a bend. Mods include extra/lost spaces/turns, enforced/canceled pit stops, retirement, or (many) no changes. Some of those mods are whole positions rather than spaces - it must start getting a bit random and skill-less. The lap is 39 spaces long and the track is only 1 space wide with only 2 cars allowed per space so there's going to be lots of blocking: however it is obviously a 'ladder' game and not one where skill predominates over other factors to any great extent. One of the cards takes out the car you're overtaking as well as yours! A couple force a race restart.... You can forgo part of your move by declining to overtake in some situations, to avoid picking up a card. A few spaces on the straights have optional card pickup as well. Shame there's not a big skill factor, because those cars are really nice. (From a Micro-Review by David Budd) http://people.man.ac.uk/~zlsiida/text_files/mrbg-rev.html#cpgpc