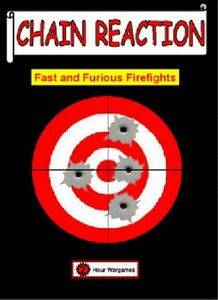 From the designer: "World War II, “Bug Hunts”, Colonial Wars, Vietnam, “B” movies, and Al Capone. What do all these things have in common? Heavy firepower. Whether you're patrolling the front lines, leading a gang of survivors in a "dark future" wasteland, or rooting out Zombies, yes, Zombies, CHAIN REACTION provides the rules. Any combat that involves modern weapons can now be recreated in a realistic manner. By generating the scenarios for you, CHAIN REACTION lets you link all your combats into one long continuous story. Easy to learn game mechanics and a unique "reaction system" combine to make every game different. The realistic combat system works for a number of genres from military operations, to near future gang warfare, to even “B” movies and "alien adventures". The only limit is your imagination. Now about those Zombies…" Miniature wargame for games with heavy firepower. Campaign system links fights together to tell a story. Can be played solo or with lots of people. First published as "Guns and Girls", but the cover caused quite the stir, it was replaced by Chain Reaction. Updated version released as Chain Reaction 2.0 - Fully Loaded