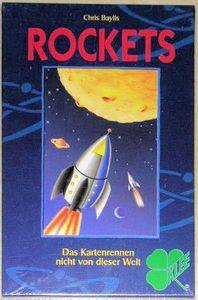 Players race their rockets to the moon, 20 fields from Earth. Each player holds six random number cards. A first card from the draw pile is flipped over. Players now take turns playing cards on this discard pile. If the number played is higher than the current top card of the stack, the player moves his/her rocket forward by the difference between the cards in fields. If it has the same value, the player must move another player's rocket by one field. If the played card is lower, the active player has two options: Either move his/her rocket back the difference, or draw the difference in cards (this is the only way of getting new cards). A round ends when either a player has reached the moon, or someone runs out of cards, or the stack is used up. Then each player deducts the number of cards in his/her hands from the number of the field his/her rocket is on, and scores that number of points. Play as many rounds as there are players. The player with highest overall score is the winner.