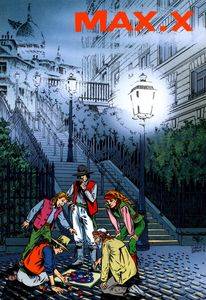 extrapolated from translation Contents: 15 colored dice 1 special die (grey) 1 board 1 set of rules Aim of the game To fill zones of 2 or 3 spaces with dice showing the same number, and if possible of the same color. More points are gained if these are also in the same circle. How the game is played: This player will throw the dice 5 times in order to place all the dice on the board. 1.The player throws one die of each color along with the special die. 2.The player checks the special die in order to see what possibilities are open to him for changing the outcome of his throw and improving the position. The value of the numbers of the dice does not affect the result. Explanation of the symbols of the special die: The side which has two dice drawn on it permits the player to change the number on 1 or 2 of the the 3 dice thrown to match the number showing one of the other die. The side which has one die drawn on it permits the player to change the number of one of the dice thrown to match the number on one of the other two dice thrown. The symbol of the 2 half circles with arrow heads allows the user to interchange the position of two dice already placed by him on the board with a view to ending up with a group of dice with the same numbers and, even better, of the same color as well. The symbol of the 3 small squares with a divided arrow coming from middle one allows the player to change the number on a die which has already been placed on the board or which the player is about to place on the board, to any other number. The Flying Turtle is the super bonus. It allows the player to do all the moves which are permitted by the other symbols on the special die. Further more, when placed in the center of the board it increases the players points considerably. 3. Once the player's throw has been adjusted to take into account the special die, the player places his dice in the zone or zones of his choice. He will in so doing try to fill the empty spaces in a circle with dice with the same numbers and if possible, of the same color. End of the game: The player who has the highest score after 5 turns wins.