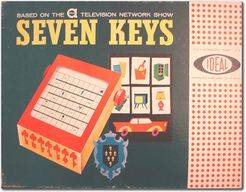 Based on the long running (1960-65) game show, players try to make it past a 70-square playing field in a maximum of 15 moves. The player moves from 1-10 spaces, landing on questions and spots such as Safety, Bonus (move ahead by up to 10 more spaces), and Penalty (move back by up to 10 spaces); missing a question puts the player back at the first spot (or the last Safety reached) If the player makes it to the end of the board, s/he wins a Key which can be used to unlock prizes like a pen, a gallon of ice cream, a typewriter, or a movie camera. Once all seven Keys have been won, the game ends.