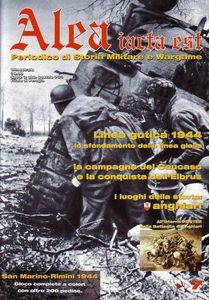 "The battle of the Yellow Line". Kesserling defense on the Gothic Line. The protagonists assesments: "This campaign is a hard row to hoe. It is the most difficult country in Europe, and yet we always get troops and equipment taken away from us for elsewhere. We have done all the fighting on a very narrow margin of relative strenghts".The battle of Rimini was "one of the hardest battles of Eighth Army. The fighting was comparable to El Alamein, Mareth and the Gustav Line (Cassino)". (Sir Oliver Leese) The battle of Rimini "had been as bitter as El Alamein and Cassino". (Sir Richard McCreery) "On the Apennines, south of San Marino, was fought the biggest battle in Italy: the names of Fano, Pesaro, Cattolica, Riccione and Rimini remain in the history of war." ( Beelitz and Heckel, German H.Q., Bellaria, Summer 1945) "The battle of Rimini, as characterised by concentration of material in a confined area, will take its place in history as an example of a battle of attrition in the grand style.. For the first time the German troops could conduct defensive operations in a major battle as laid down in the German manual "Field Service Operations" (Truppen Fuhrung)" (Col. Horst Pretzell, German H.Q., Bellaria, Summer 1945) "The battle of Rimini has been the biggest battle of materials fought in Italy" (Schäffer &amp; Wöbbeking in Gen. Joachim Lemelsen '29.Division') "The battle of the Apennines is a famous page in the military history of Germany". (Generalfeldmarschall Albert Kesselring, Commander Group of Armies 'C', South-West) "The XV Army Group performed a successful undertaking that surely has never been exceeded.The Gothic Line was stormed by the American 5th Army and by the British 8th Army." - (Retroversion from Sir Harold Alexander's "Memoirs") "Victories, like the taking of Rome and the storming of the Gothic Line keep their name through the centuries." (Eric Linklater)