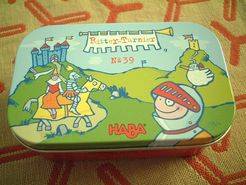 This game is new from Essen 2003. An import, the game rules provided come in many languages (including English) and the components are language-independent. Description: Bring the knight to your castle to get valuable knight's cards. Get three knight's cards first to win the game. The five cards with the road are placed between the two players. At each end of the road a castle card is placed. Both players get 12 cards in one color. All the cards are numbered. Every round the players place a card face down on the table. At the same time the players turn around their cards. The player with the highest card wins the duel and moves the knight towards his/her castle. When the knight arrives at a castle, that player wins the knight. If a player has three knight cards, he or she wins the game.