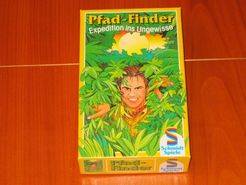 With the 33 way-tiles and some extra pieces (like an oak, a castle, a bus-stop...) a path is build on the table that the players have to recognize. On their turn players have their pawn moved by describing which way they take and in which direction they're turning. Whoever reaches the end of the path first is the winner. Small game which requires a huge portion of memorizing.