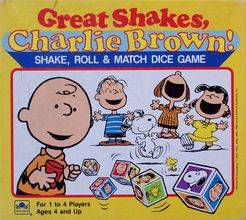 Shake, roll then match the lovable characters on the dice to those found on the game cards. A special wipe-off surface lets you erase and use the cards again and again. Match &amp; Count (Side 1) Roll all of the dice and set aside the character that appears the most. You have two more chances to re-roll the other dice to try to roll more of that character. You score points for how many of that character you rolled. After the first 6 rows are filled, players move to the bottom two rows, attempting to match the characters as shown, and score 5 points if they succeed. Match Race (Side 2) Each player gets one die (two if two people are playing). Choose a row or column on the card, and all players, at the same time, roll their die/dice and race to match all of the characters in that row/column, placing an X on that square as it is rolled. Roll a Row (Side 2) Roll all 5 dice, trying to match a sequence in any row or column on the grid. You have 2 chances to re-roll, and if you succeed, you may circle that row or column. The winner is the player with 5 rows/columns circled (they may overlap).