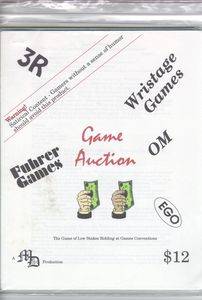 From the designer's description on Web-Grognard's (slightly edited): Game Auction is a satirical look at the wargaming hobby and the games, people, and companies that make up the hobby. With tongue firmly planted in cheek, I have designed a game that simulates all the fun and craziness of a live wargame auction. Based on MODERN ART, the game adds event cards that may be played on yourself or on an opponent during the course of an auction (and includes such cards as "buying frenzy" where your emotions take over and you want to buy anything that has cardboard and dice, or the ever popular "Paranoid" where a player has come to the conclusion that a person is bidding against him not for the game but to out bid him--it has become personal). The game also adds condition cards that are played after a round of auctions is completed. It simulates that moment when you finally open the box that you've just purchased. With condition cards, you can find anything from a designer's autograph to mildew. The game also comes with a complete description of the companies and games that are up for sale. You will run into companies like EGO Games, "considered by many including themselves to produce the ultimate wargames, this company features some of the most famous personalities in the hobby. Renowned for their use (some would say abuse) of color, their games feature everything a wargame should have and a lot that isn't necessary. Their motto is 'If you can't understand our games, we are not surprised.'"