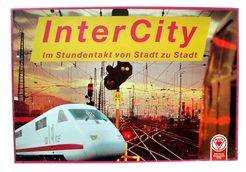 Every player gets two trains. One rides from noth to south, and the other from south to north. The players draw a start-card. There are two city names on a start-card. Each player puts his/her passengers on the start locations. Then the destination-cards are drawn. There are two city names on a destination cards. A stopover and the destination. On a player's turn, he/she moves all the train one space forward. Next the player throws the dice and moves the trains of which he/she has thrown the colors. If a train passes a station, a passenger can get in the train or change between trains. When a passenger arrives at the stopover or at his destination, the player receives a station-card as prove he/she stopped at the station. The first player which brought his/her both passengers to the right stations wins the game.